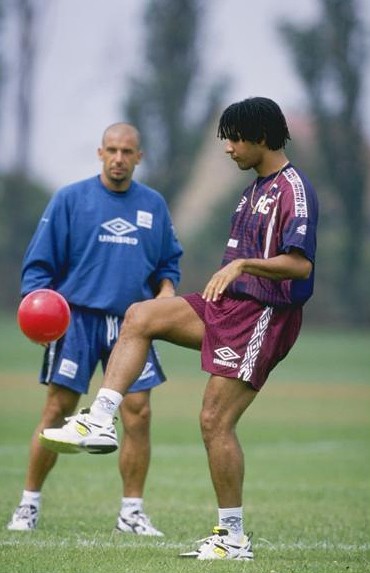 Gianluca Vialli was a Chelsea legend as both a player and a manager winning silverware in his first season in both roles.

Loved by the fans, he continued to live in SW6 for more than two decades up until he died in 2023, aged just 58.

He was the epitome of the transformation the club underwent under Ruud Guillit. He will be remembered for his technical ability, vision, and clinical finishing but also for his charismatic character, bubbly attitude and love for the club.

He was comfortable with the ball at his feet and could score goals in various situations. He was also known for his leadership skills on the pitch and his ability to bring the best out of his teammates.

After retiring as a player, Vialli became a manager and was known for his tactical understanding and ability to build successful teams.

The stand-out moment for us was coming off the bench against Liverpool in the FA Cup to score a brace as the Blues came from two-nil down to win the game 4-2. Chelsea went on the win the FA Cup that year, the club’s first major silverware for more than 25 years.

Vialli joined the club as a player in 1996 from Juventus on a free transfer and, after the sacking of Guillit in early 1998, became the first Italian to manage a Premier League club as a player-manager aged just 33.

That year he won the League Cup, UEFA Cup Winner’ Cup and UEFA Super Cup just months into his tenure as manager.

After retiring to focus on management, he continued the legacy of Ruud Gullit as Chelsea challenged for the title for the first time in generations playing exciting attacking football.

This led to the club qualifying for the Champions League for the first time, reaching the Quarter Finals in the 1999-2000 season.

He went on to win the FA Cup and Charity Shield that year before being sacked early in the 2000/2001 season after a poor start.