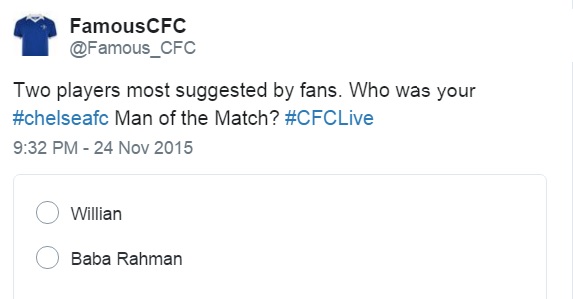 Last night Chelsea ran out comfortable winners against Maccabi Tel Aviv. This win looks emphatic on paper but against ten men for more than 45 minutes the overall tone of the performance was slightly worrying.

It was the quality of the opposition and a wild moment by a former Chelsea defender that allowed the score to look so respectable, rather than a rampant Chelsea performance.

Eden Hazard, Diego Costa and Cesc Fabregas all looked lacklustre and failed to make an impact, whilst Jose Mourinho may laugh off arguments at half time with Costa, it was clear that something was not quite right.

Going forward, things were still too slow, the goals game from set pieces and despite the advantage we did not dominate the chances as you would have expected. In fact even down to ten men Tel Aviv were able to force Asmir Begovic into some fine saves.

A win though is a win, a draw against Porto will see the Blues through and when you are not playing well that is all that matters.

Willian Man of The Match

Two players most suggested by fans. Who was your #chelseafc Man of the Match? #CFCLive

Despite some of the star names having average nights there were some standout performances, Begovic produced two or three top saves and Baba Rahman showed that going forward he has the ability to cross the ball.

The stand out performer though was the same person as it has been for the majority of the season. Willian put in another fantastic shift and scored his sixth set piece in 12 attempts this season.

After he and Baba Rahman got the most tweets suggesting they were candidates for man of the match, we put it to a vote and the result was overwhelming.

Willian got the FamousCFC man of the match award gaining nearly 70% of the 500+ votes cast, lets hope he can continue that against the team that bought his flight.