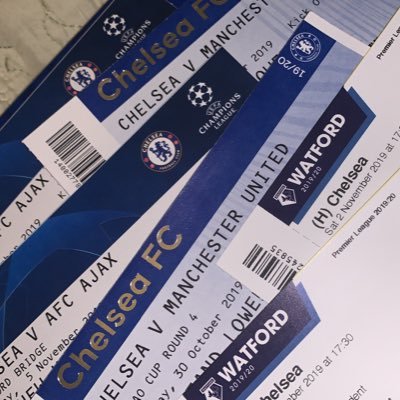 Chelsea Ticket Scams – How To Avoid Them When Buying Tickets

It is getting harder for fans, even members to get Chelsea tickets through official channels.

This increase in demand combined with the abolition of printed tickets at the box office means that there has been a marked increase in the number of Chelsea ticket scams we are seeing on social media.

The ticket scammers are hard at work trying to convince you to part with your cash, whilst this article does not constitute legal advice, we hope sharing our experience will help you avoid being scammed.

Buy Direct From The Club

We strongly recommend that you buy your tickets from the club directly.

The easiest way to do this is to become a Chelsea True Blue Member and keep an eye out for when tickets go on sale to members. Whilst this method is not guaranteed and demand is high, it is the most effective way to ensure you are getting a genuine ticket for the game.

Being a member will also give you access to the Chelsea ticket exchange where season ticket holders that cannot attend can get a rebate from the club for putting their ticket on the exchange.

The ticket exchange usually opens between 10 days and two weeks before each home Premier League game and can be a great way to snag a ticket after the club officially sells out.

If you live outside the UK find the nearest official supporters club near you and consider joining.

Supporters clubs get exclusive access to tickets and you will have a ready-made community of Blues fans local to you to guide you through the process.

If you live in the United States we highly recommend Chelsea In America, they help thousands of fans make a pilgrimage to Stamford Bridge each year.

If you are unable to get tickets from approved sources then here are some things to consider to avoid Chelsea ticket scams.

Check The Face Value Of The Tickets Offered

Ticket touting, scalping or flipping for profit is illegal in the United Kingdom, so whether you are buying via a website, the street or via social media any tickets being sold above face value should be treated with extreme caution.

We will never recommend any of these channels as they are all high risk, even if you take all reasonable precautions.

It is permissible for fans to sell tickets at face value if they are unable to attend.

This is becoming increasingly more common as fans purchase tickets to stay ahead of the loyalty point system.

It is now common for season ticket holders and members to buy tickets for games they do not attend and sell them on at face value to maximise the number of loyalty points they accrue.

This maximises the chance of getting tickets for high-demand games particularly away trips and cup finals.

This makes it worth knowing season ticket holders and members who might be able to help secure you tickets on their account for games they do not want to/cannot attend.

These tickets are also offered up on social media and there are a number of different groups and communities where genuine transactions take place regularly.

Unfortunately,  these are also a ripe target for scammers who pose as real fans with fake tickets.

It is important that if you choose this route you vet purchasers carefully and where possible get another member of the community to vouch for people.

Be Wary Of Tickets Being Sold Multiple Times

Chelsea Football Club no longer issue fans with paper tickets for games. Instead, they send a PDF of a ticket with a barcode that will give you entry to the game.

This is problematic for being buying from outside official channels as it makes it possible for tickets to be sold multiple times by scammers without the purchaser being able to protect themselves or verify the veracity of the ticket.

It leads to the very real possibility of you buying a ticket, trying to get in via the turnstiles and being turned away as the barcode has already been used by another person to gain access to the stadium.

It really is a minefield now

You Cannot Buy Secondary Tickets For European Away Games

No matter what the potential scammer says, it is not possible for you to buy a ticket in the away end of a Chelsea Champions League game on the secondary market.

The reason for this is that the club introduced a policy after the Paris St Germain metro incident where all tickets need to be collected in the city of the game by the person named on the ticket. Proof of ID via passport being required before the tickets are handed over.

If you are offered an away ticket for a Champions League game it is almost 100% going to be a scam.