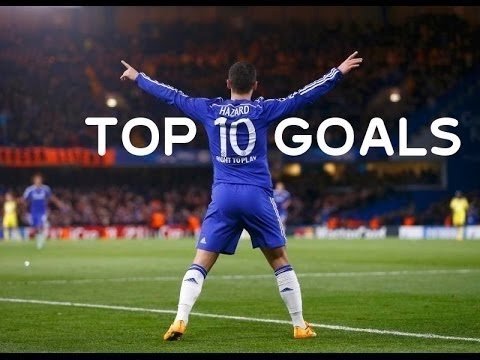 It is hard to believe it has been nearly five years since Eden Hazard arrived at Stamford Bridge so we took some time to look at some of the best Eden Hazard goals we have witnessed in that time.

The Goal That Broke Spurs Hearts

In 2015/2016 Tottenham were chasing Leicester hard at the top of the Premier League. With just a few games left they travelled to Stamford Bridge with the aim of keeping the pressure on.

Having gone two goals up they assumed the points were in the bag, however a late comeback was completed by Hazard who scored a cracker late on to secure a 2-2 draw to hand Leicester the title.

If there was any doubt as to whether Hazard was back to his best then this gem of a solo run ended the discussion. He beat multiple players and then slotted the ball past the keeper with an expert finish before running off to the Chelsea faithful to celebrate a cracker.

Scoring against Manchester United is a great way to gain the adoration of Chelsea fans. Eden Hazard did this beautifully with a curled beauty from the corner of the 18-yard box.

Left-hand edge of the 18-yard box and Eden Hazard curls in a beauty to earn us a replay in the FA Cup.

The season is not over for Hazard and we hope he will add many more cracking goals to his Chelsea resume before his time at the Bridge ends.

After all, his trophy cabinet at Chelsea includes the Europa League, League Cup and the Premier League. If he adds to that this season then let’s hope he stays to score more goals in the Champions League next season.