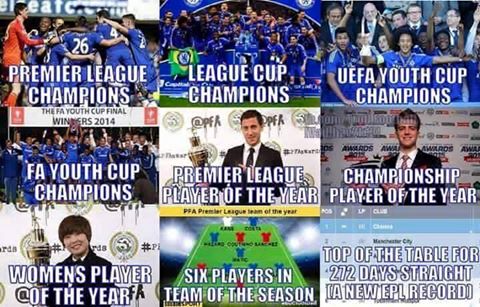 Yesterday Chelsea won the Premier League with three games to spare underlining the force of nature and hunger for winning at Stamford Bridge. This hunger extends beyond the first team and has permeated across the English game at a Mens, Womens and Youth level, even our loanees have been getting in on the act.

This Chelsea meme shows the dominance that the Blues have had in English football this season across all levels of the game.

Premier League Champions – won with three games to go, we are Champions for the first time in five years

FA Youth Cup Champions – For the second year in a row our u18’s won the most prized competition in domestic youth football with talented players such as Dominic Solanke starring.

Championship Player Of The Year – Patrick Bamford’s goals on loan to Middlesbrough earned him the player of the year award in the Championship.

Women’s Player Of The Year – Ji So-Yun won the PFA Women’s player of the year award and the Chelsea Ladies team sit top of the Womens Super League. Whatever level or competition across the board the blues are dominating.

Six Players In The Player Of The Year Team –  Chelsea players took more than half the spots in the PFA team of the year – John Terry, Diego Costa, Gary Cahill, Branislav Ivanovic, Eden Hazard, Nemanja Matic

What a brilliant season for the Blues.