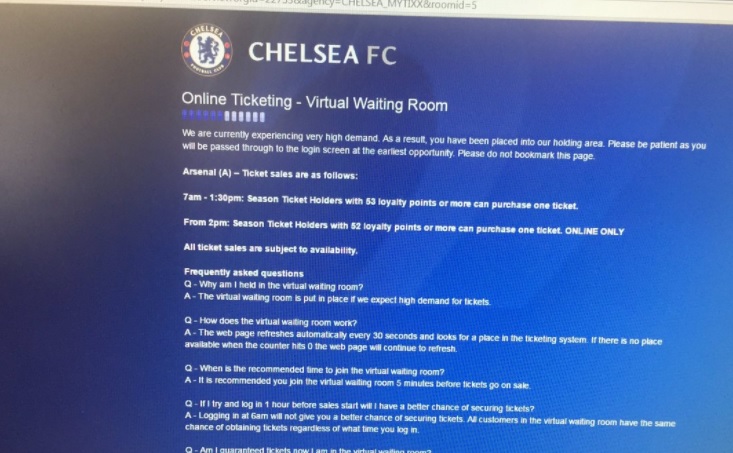 Getting Chelsea tickets is a mix of planning and early starts to try and keep ahead of the terrifying “virtual waiting room”. The screen that meets fans when trying to buy tickets for games that are in demand.

Many times we have been trying to buy tickets but not got further than that dreaded screen that seems to take an age to refresh or take you to the all important purchase page.

Increasingly this year even intense planning and commitment has not been enough to secure tickets. Particularly for games away from home where tickets seem to sell out the moment the clock strikes 7am.

Too many times we have had to rely on connections to get the tickets we want.

The reasons tickets are harder to get for members (and ST holders for away games) is a combination of three factors. Two of which should bring smiles to the faces of fans but also lead to frustration.

Winning teams increase demand for tickets as casual fans come out of the woodwork as there is more to be excited about. This makes it harder to get tickets to games where loyalty points do not give you a priority.

The impact on tickets of a winning team happens at every level of football (see the sold out FA Cup games when a League Two draws us) but can lead to frustration.

A winning team also means more touting as interest in the team is higher with tourists and casual fans alike. Every ticket in the hands of a tout is one that cannot be bought by a real fan legitimately.

The irony cost of away tickets going down has made it harder to get tickets. It has increased demand and encouraged members (and season ticket holders we hear) to buy tickets for games they have no intent to travel to for the loyalty points.

This is frustrating but understandable in a season where the key games at the end of the season will be available only to those with healthy loyalty point balances. I am conflicted taking tickets from people doing this even at face value due to the distortion it causes to the ticket sales market.

A new stadium is on the horizon, but until then for Chelsea Football Club members buying Chelsea tickets looks like it will continue to require, planning, luck and knowing the right people.

As for away tickets, it may not be long until for security reasons these are only given to fans in the city of the game with valid ID. A solution but not necessarily one we are onboard with.