They say that football is a game where 22 men run around for up to 120 minutes and then the Germans win on penalties. The defeat of Italy means that Antonio Conte will say goodbye to the Azzurri and the real business of the summer begins as he looks to make his mark at Chelsea.

Antonio Conte comes with a pedigree but so have countless other managers before him like Felipe Scolari and Andre Villas Boas, to succeed he will need to make an impact and make it quickly.

Plenty of Work For Antonio Conte

He has plenty of work to do, there are problems to solve up and down the pitch to make the Blues competitive in a league where the standard has bumped up a notch in the last 18 months. During his time in charge of Italy our new coach has impressed with his tactical knowledge and passion, two things that Chelsea need in spades to turn things around.

The Blues need to close the leaks defensively whilst adding a more direct and attacking style of play that does not rely on making 100 passes before finally thinking about shooting on goal. In midfield the Blues need to add some solidity far too often last season teams would simply blast through the middle in one or two passes and create a chance that would take endless build up for Chelsea to create.

We are likely to see some changes in personnel and players that have been evergreen during the last 2-5 years may suddenly find their positions under threat unless they can step up to the plate.

It sounds simple doesn’t it concede less and score more, maybe this is why our level of tactical knowledge is restricted to posts on a fan site rather than managing the team ourselves. 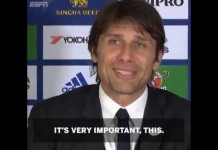 Chelsea Pre-Season – Conte Getting It Right